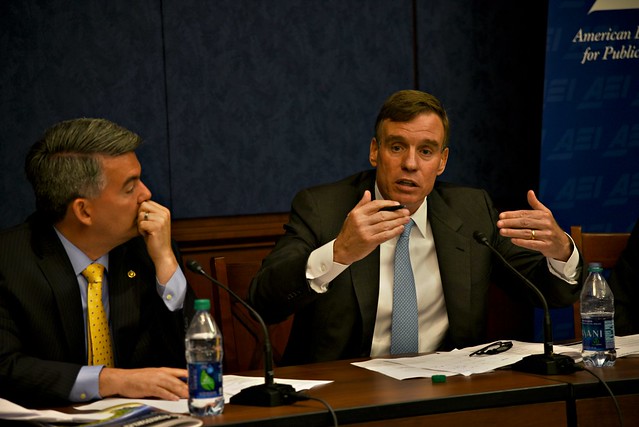 On Tuesday at an American Enterprise Institute event today on Capitol Hill, U.S. Sens. Mark R. Warner (D-VA) and Cory Gardner (R-CO) announced the creation of the ‘Senate Cybersecurity Caucus’ to provide a platform for Senators and their staffs to stay informed on major policy issues and developments in cybersecurity.

The announcement was captured in a release on Senator Warner’s site, which said:

“Cybersecurity is one of the most serious economic and national security challenges we face as a nation, and both the private and the public sector need to be better prepared to address the escalating threat from cyberattacks. So far this Congress, nine Senate committees have held hearings on this issue, focusing on aspects as diverse as protecting taxpayer information from cyber theft, the development of deterrent technologies targeted at foreign actors, and the need to secure our infrastructure against intrusion. These hearings provide useful insight into the many aspects of our cyber vulnerability,” said Sen. Warner, a former technology executive and member of the Senate Intelligence Committee. “However, the attack surface is rapidly expanding, and the cyber threat is a systemic one. We are launching the Senate Cybersecurity Caucus as a platform to engage in holistic discussions about cybersecurity across Committee jurisdictions, and to keep Senators and their staffs up-to-date on new cyber developments.”

“As the cyber threat continues to evolve, so must our strategy,” said Sen. Gardner. “ Rifle shots targeting a massive, growing problem have fallen well-short of sufficient. We need a grand strategy to combat positively identified bad actors, and that requires a broad policy response that is adaptable to technological developments and the ever-changing cyber field. The goal of the Senate Cybersecurity Caucus is to jumpstart discussions about how to best address the cybersecurity challenges we face, and I’m hopeful my colleagues will recognize this caucus’ role in strengthening our national security and join us. We need a whole of government approach to cyber, and this effort will start focusing cyber policy on the full spectrum of threats and opportunities.”

The caucus will focus on various aspects of the cybersecurity problem, including impacts on national security, the economy, and digital security. The caucus will provide unique opportunities to inform Senators on the major cyber policy issues facing Congress, introduce Senators and their staff to leading cybersecurity experts, and promote bipartisan and cross-jurisdictional discussions on this important issue.

Cyberattacks account for up to $120 billion in economic and intellectual property loss annually in the United States and cost the average American firm more than $15 million per year, according to experts. Additionally, consumer concerns about cybersecurity are increasingly impacting the growth of the digital economy. Survey research from NTIA just last month indicated that 45% of households reported that concerns about online privacy and security stopped them from conducting financial transactions, engaging in e-commerce, or posting on social networks.

This is an encouraging step that holds great promise for change.

Connect Here
Bob Gourley
Co-Founder and CTO at OODA
Bob Gourley is the CTO and Co-Founder of the due diligence and cybersecurity consultancy OODA LLC , which publishes CTOvision.com and OODAloop.com. Bob's background is as an all source intelligence analyst and an enterprise CTO.

Bob Gourley is the CTO and Co-Founder of the due diligence and cybersecurity consultancy OODA LLC , which publishes CTOvision.com and OODAloop.com. Bob's background is as an all source intelligence analyst and an enterprise CTO.